Will the final installment of the Brightstar Saga see the family reunited at last or forever separated by space and time? 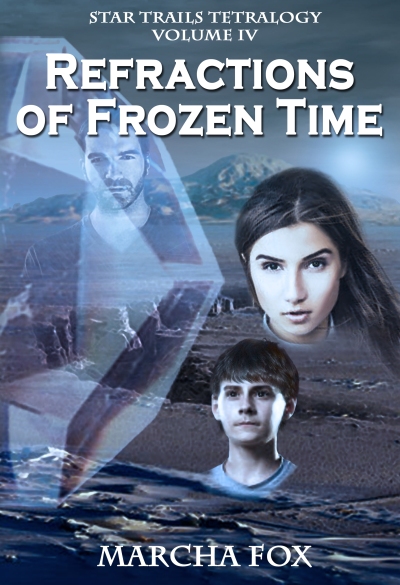 The conclusion to A Psilent Place Below finds Dirck and Creena in shock as they realize they missed the entire point of their shared veridical dream.  Their oversight results in a treacherous situation where their father, Laren, is ambushed by Integrated forces and charged with treason.  He’s immediately sentenced to permanent exile and placed onboard a spacecraft that will deliver him to the galaxy’s prison planet, Bezarna, a blackhole from which there is no escape.

Refusing to accept the situation, Creena is more determined than ever to uncover cristobalite’s secrets as a means for bringing him back.  When Deven discovers yet another crystal that can bend time hope returns, but their joy quickly turns to horror as Integrator commandos discover their cavern sanctuary and they’re forced to flee to the Clique base at Apoca Canyon.  Using their latest discoveries, they risk contacting Laren which succeeds.  He relinquishes command of Clique forces and directs them to accept his fate.

In spite of what he told them, however, he’s discovered the exile vehicle’s dirty little secret, which he hopes to exploit so he can return safely to Cyraria.  Using his c-com he hacks into the ship’s systems, but his intrusions are discovered, which infuriates his nemesis, Augustus Troy, who decides to exterminate everyone onboard.  Bryl’s connections to Esheron reveal some surprising information that may help Creena and Deven, who still haven’t given up as a race against time ensues, not only to save their father, but their own lives as well as the Integrator closes in with the ultimate weapon.

Join the Brightstars along with Win, Aggie, Thyron, Bryl, Igni and new characters Storm, Bernie Tucana, and Antara Denali for the exciting conclusion to the Star Trails Tetralogy.

Learn more about Refractions of Frozen Time at the official Star Trails Tetralogy website, where you can find videos, links to chapter excerpts on Bublish, how to obtain an autographed copy directly from the author, and more.

“Author Marcha Fox has a gift for explaining the science. The detailed world she creates in the Star Trails Tetralogy is genius, so well thought out and crafted. As the Brightstar youngsters observe and understand their surroundings, their conclusions can be coloured by their Miran schooling, but when they break old habits and open their minds in order to survive this hostile planet they now call home, these children achieve the incredible. Quite Beautiful.” – Ceri London, Author of “Shimmer in the Dark” series

“What sets this apart from run-of-the-mill ” space operas is Fox’s experience during her tenure at NASA. She draws upon her technical expertise and enhances it with fact-based theory that gives this as much of a ‘what-if’ perspective as you can expect within the genre. The moral and philosophical questions also give us much to reflect upon.” – John Reinhard Dizon, Author of “Tiara”

“[The author’s] creativity and imagination never fall short but always leave me wanting more. Each character has been carefully crafted and developed. I enjoyed watching the children develop and grow from bickering teens to collaborative young adults. The final climax had me shivering as the forces of dark and light came hurtling together into an unexpected and shocking end.” – Elle Klass, Author of the “Baby Girl” series